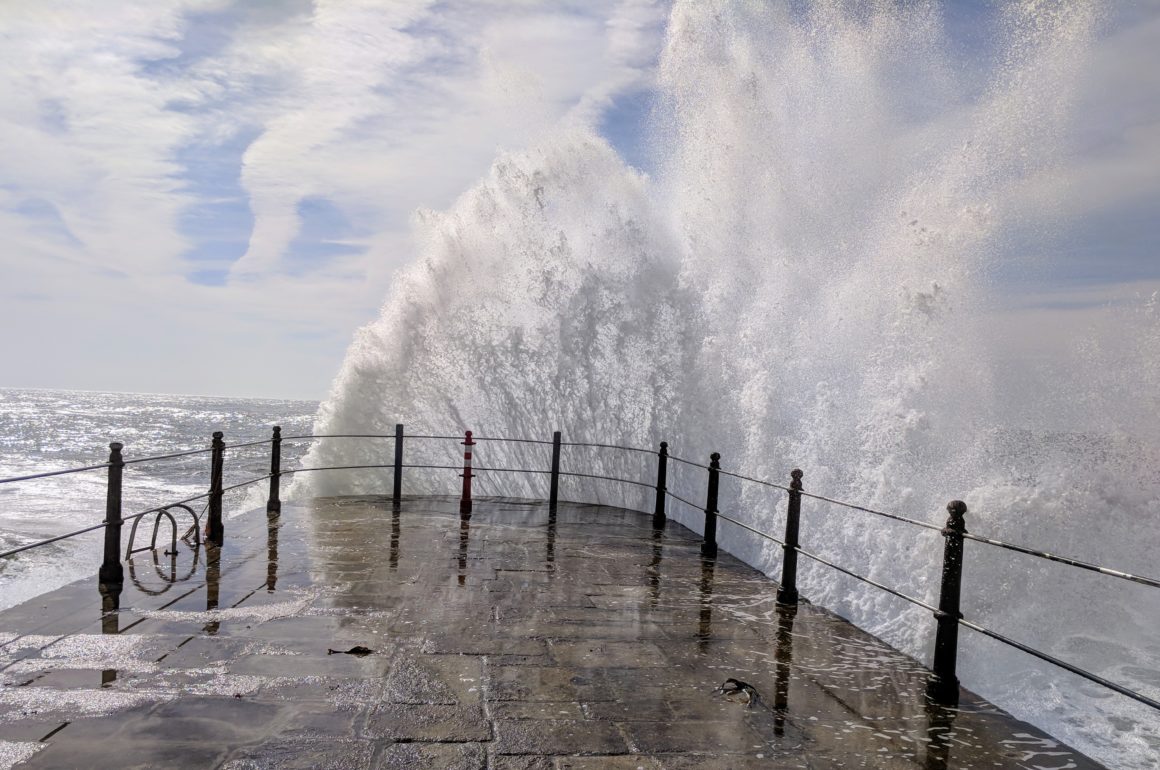 There’s so much to experience in the city of Porto that unless one spends an extended amount of time in the city, the average length of stay visitor will miss so much.  Most visitors won’t know to take the local train to Espinho to walk the coastal boardwalk or visit the market.  And, most visitors won’t know how to walk from Matosinhos to Porto, which is the path many Camino pilgrims follow to exit the city as they walk toward Spain.

A quick Google search will tell you that it is a 7.3 km walk (4.5 miles) and you can make the walk from Matosinhos to Porto in under two hours, but you’d miss so much.  The last time we took on the walk I think we spent the better part of an entire day.  Because if you’re going to walk, then why would you hurry through it?  There is so much to experience along the way.

Hot to Get From Porto to Matosinhos

We prefer to take the Metro Blue Line A which leaves from the Trindade Station.  At just about 4,00€ round trip per person, it’s our favorite mode of transportation to get to the beach.  Other options include the Hop On/Off bus or local bus #500.  As you walk back toward Porto there are bus #500 stops along the way, should you grow weary of walking.

Once in Matosinhos you’ll see a huge sculpture, near the beach, which we have been told is a jelly fish, but my research tells me it’s actually an anemone. It’s titled, She Moves.  Personally, I don’t see it, but what do I know?  I think it looks like a giant fishing net.  Anyway, aim for it and you can start your walk back to Porto from that point. 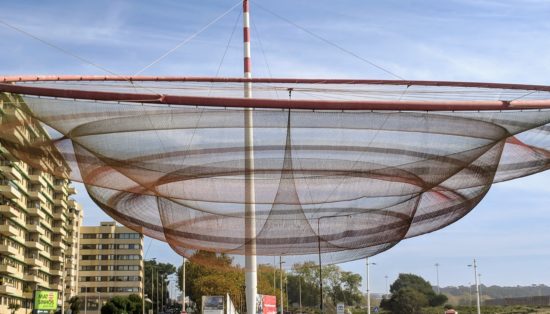 Views From the Fort

First up, stop at the historic fort, which was built in 1662.  There is a small admission fee which lets you explore inside and you can walk along the top of the walls.  It’s also a good restroom break.  It’s worth the stop as the views can be spectacular on a clear day.  I suppose I should make note here that a clear day is definitely the best kind of day to make the walk.  Not much to see if the ocean is socked in with fog.  It can be said that Porto gets some wicked fog. 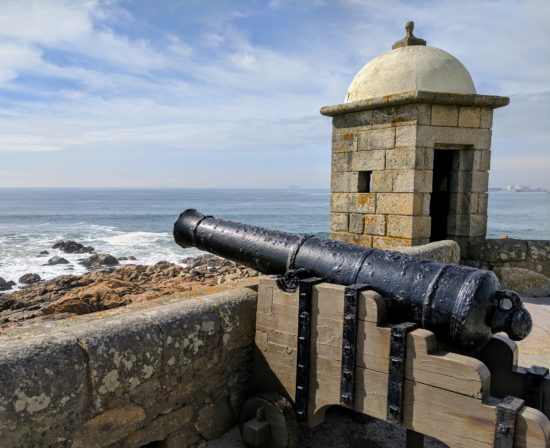 The views are well-worth the small admission fee.

Once you leave the fort just keep walking along the coast and keep the ocean on your right.  There’s no way you can get lost as you walk back toward Porto.  It’s all paved walkways or wooden board walks.  Not at all strenuous.

Although, as I mentioned, you can make the walk in under two hours, it would be a mistake to do so.  Allow yourself the better part of a day.  Think about it, you’re walking right along the coast and the Atlantic Ocean is just beckoning to you to stop and take it all in.  The breaking waves, the peaceful views, the sound of seagulls, the rock formations; it’s all there to experience.  Why hurry?

This is probably one of my favorite photos I’ve ever taken.  It’s not the picture itself, or the quality thereof, it’s the message.  A lone man sitting quietly, his hands resting on his lap, and he’s seemingly completely lost in thought as he stares out to the water.  He knows the secret.

There are several points along the path where you can stop and take in the views.  One of our favorites is a rock pier (for lack of a better word) which isn’t really a pier per-se, but I don’t know what else to call it.  There are signs posted warning of crashing waves and not to go out to the point.  But, of course, what’s the fun in that?

While he did not go beyond the point of being safe, Abi did venture out and caught some fantastic shots of the breaking waves.  We just stood there completely unaware of anything other than the waves crashing furiously one after the other.  Breathtaking. 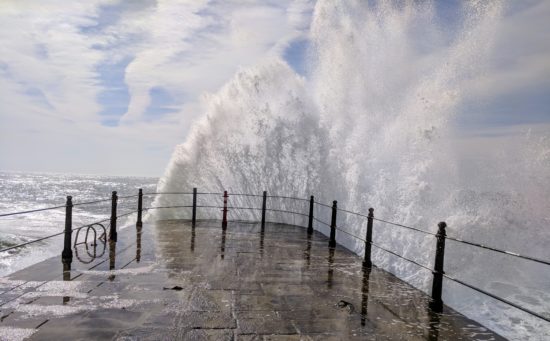 Lunch Served With A View

Now, if you’re going to take on the walk from Matosinhos to Porto, it’s important to keep hydrated and well-fed.  So, let me tell you about our favorite spot.  Molhe Restaurante sits right on the beach promenade and offers diners views to die for as they sip libations and eat yummy food.  For me, it’s a Mohito and for Abi a beer, paired with steak, fries and eggs.  Yum!  It’s our go-to meal whenever we make the walk.

Tidbit: if you open that little pack of butter, you’re going to pay for it.  The same can be said for a basket of bread that is placed on the table and/or a dish of olives.  It’s a common custom. 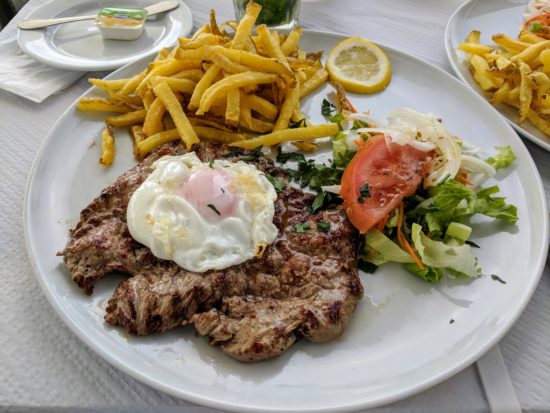 Steak, eggs and french fries served with a view.

As you make your way back to Porto you’ll come across an assortment of sites to see.  You’ll come to a rather large green space where, if the weather is cooperating, you’ll see folks enjoying a bit of fun in the sun.  There is another old fort, although I can’t quite remember if it’s accessible to the public, and you’ll come across several little wagon shops selling roasted nuts or crepes, or ice cream. 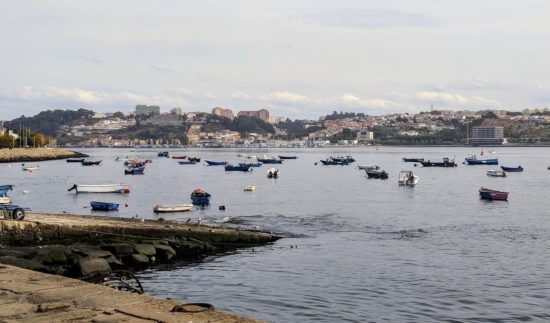 Soon, you’ll come to the sea wall, at least that’s what I call it, where the Duoro River meets the Atlantic Ocean.  It’s super interesting to sit and watch the change in the water and to see all of the local fishing boats making their way in/out.

The Dom Luis Bridge is by far the most recognizable bridge in Porto.  But, there is another bridge that deserves recognition as well. The massive concrete bridge, the Arrabida Bridge, carries six lanes of traffic across the Duoro River. 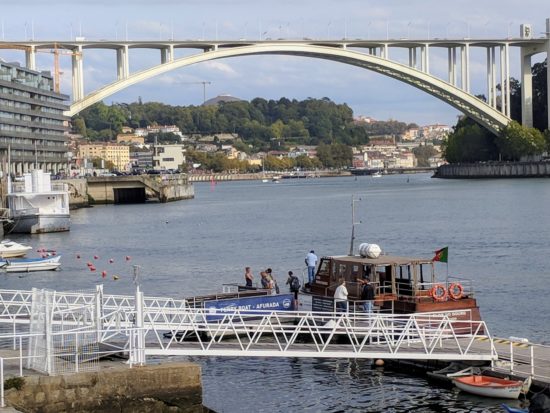 You will walk directly under the bridge and when you do, stop and look up at the underbelly of the bridge.  It makes my head swoon, but it’s really something to see.  Actually, you can take a guided climb up a portion of the bridge, if the mere thought doesn’t make you queasy. 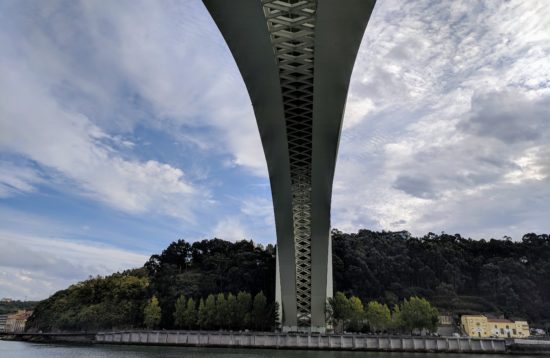 The underbelly of the Arrabida Bridge.

Once you reach the Arrabida Bridge, and as soon as you make your way along the wide bend in the river (you’ll actually walk on a catwalk over the bank of the river), you’ll see the Dom Luis Bridge in the distance. Porto is just ahead.  From this point you can continue to explore the waterfront and the shops, cafes and little churches packed in tight between the river and the granite cliffs.  Or, you can veer off and head up one of the many steep hills and make your way back to the city center. 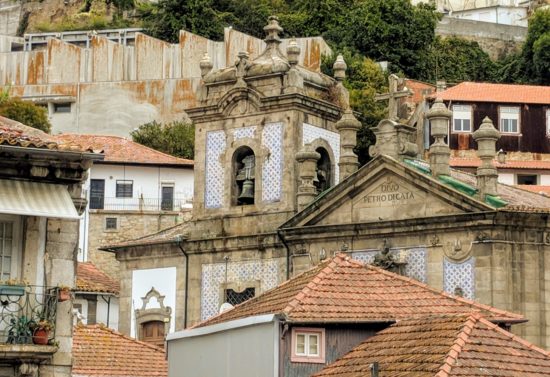 Off the tourist path, this lovely little church, packed in tight between the river and the cliffs, is well-worth a visit.

How to Walk from Matosinhos to Porto

Now, am I right, or am I right?  Is that not an amazing way to take a good long walk and experience Porto in a way most visitors to the city will never experience?  Aren’t you glad I told you?  You’re welcome. 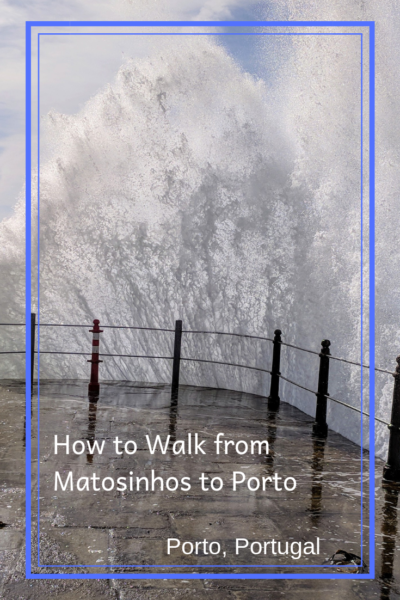