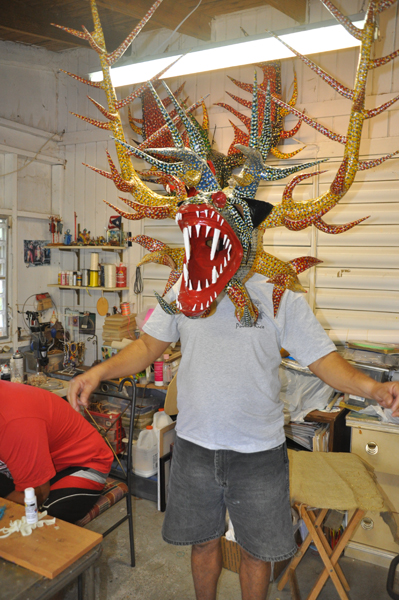 The following guest post is shared with us by Meg Pier.  I met Meg online, which is where I meet most of the people I introduce you to, and through our online conversations we have discovered we follow some of the same paths in our lives.

And by the way, every time I write something along the lines of “through our online conversations” it always gives me pause to think what a world it is in which we live, that communication is literally at our fingertips.  I may never meet Meg in person, but my keyboard has brought her to me and I never stop finding that amazing.

Meg is a writer, photographer and proprietor of a travel and inspiration site, www.ViewfromthePier.com, which is all about “Connecting with Self, Others and a Sense of Wonder through Travel.”

I saw them everywhere I traveled in Puerto Rico.  In museums, restaurants, and even in people’s homes, the creatures known by locals as vejigantes leered at me, their grotesque features contorted into a maniacal grin.  Eventually, I not only got used to them, I became quite taken with them, even bringing a couple home with me.  The vejigante is a colorful character that is a blend of Puerto Rico’s African, Spanish, and Caribbean influences and a key figure in several of the island’s annual celebrations, particularly Ponce’s Carnival and Loiza’s Santiago Apóstol Fiesta. According to people I met, the vejigantes represent either the devil in the battle between good and evil or the Moors that Saint James fought during the Catholic Reconquista of Spain. 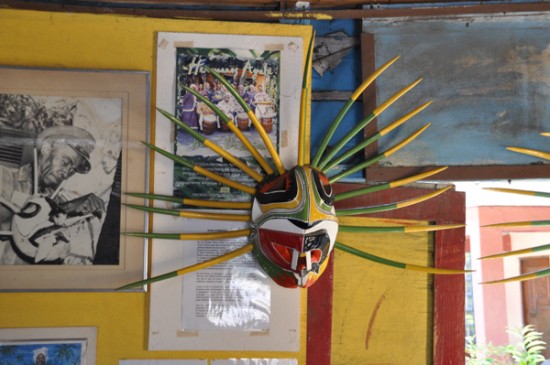 The work of Raul Ayala

The name vejigante originates from the Spanish word for bladder, vejiga.  During the Carnival and Santiago Apóstol festivities people dressed as vejigantes roam the streets in groups, chasing people and trying to scare them by hitting them with a balloon-like sack made from cow bladders.  The vejigante’s costume looks like a jester’s suit with a cape and bat wings under the arms, topped by a vividly-painted and fierce-looking mask.

Today, creators of these masks are artisans of world renowned and esteemed members of their community.  In meeting three of the island’s best-known mask-makers, I learned about their techniques and the history of the folk art.

The handiwork of artisan Miguel Caraballo, 70, has been recognized by the Smithsonian. Caraballo is a life-long resident of Playa de Ponce, a city on the southern coast that lays claim to the island’s oldest Carnival celebration, which has been in existence for 153 years.  He has been making vejigante masks since he was a boy, when he created them for himself and his friends to wear with their costumes during Carnival festivities. Visiting Caraballo in his modest bungalow, I observed him creating masks, which he produces in groups of ten.  He mixes the paste from scratch and applies it to layer after layer of newspaper over a mold, which he then sands.  Later, he’ll add the horns, also constructed of papier–mâché, and then apply paint.  Each mask is dappled with hundreds of tiny dots of paint atop a brightly-colored background. 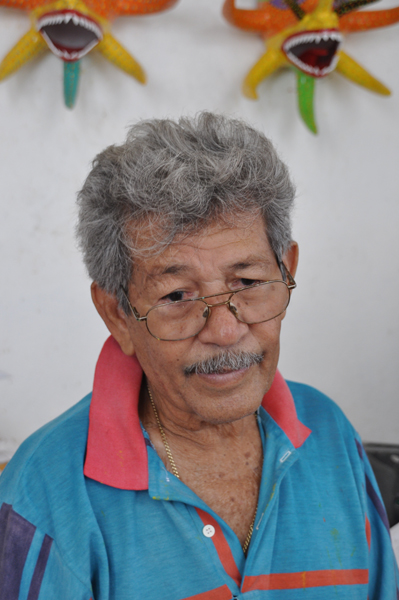 “To be a traditional mask, it has to have the spots and the horns,” he said. “Painting each mask can take up to two weeks.  When I was growing up, the masks were strictly for fun during the Carnival–today they are collected.  There is a difference between the masks made for collectors and those that will be worn, with the latter needing to be much more lightweight.  The largest mask I ever made was seven by seven feet.” 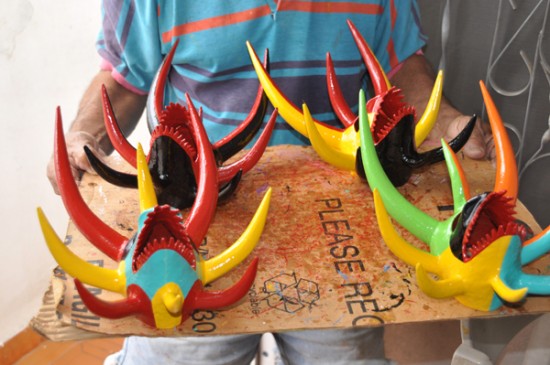 The work of Miguel Caraballo

Caraballo learned to make the masks from a neighbor, Francisca Salvador, who was the matriarch of a family that had been making masks for three-generations.  Her son Juan Alindato and his son, also named Juan, are well-known Ponce artisans.

Juan Senior was recognized by the National Endowment for the Arts in 1987 for his mask making.  He died last year and his wake was held at the Parque de Bombas, a distinctive Ponce architectural gem and beloved landmark.  Thousands attended, celebrating his life and role in the community and Carnival floats were part of the funeral cortege.  Because of their mask-making tradition, the Alindato name is closely associated with the Carnival–Juan Senior was a past King and Juan Junior’s wife was recently the Queen.

Visiting Juan Junior in his Ponce de Playa workshop, he pointed out different masks, noting that the shape of the horns, mouth or beak form the identity of a different creature such as chicken, horse, lion or dragon.  He told me he has own particular style of painting the dots which is his signature.  He showed me the mold he uses to form the mask–it was his grandmother’s and is more than 60 years old. As Juan explained his techniques, his granddaughter sat nearby at a table joyfully involved in her own creative process.  Juan told me that one of his daughters is a mask maker and he hopes the tradition will continue among other generations. 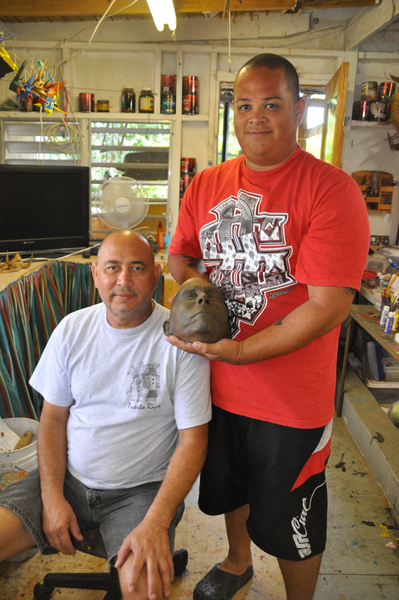 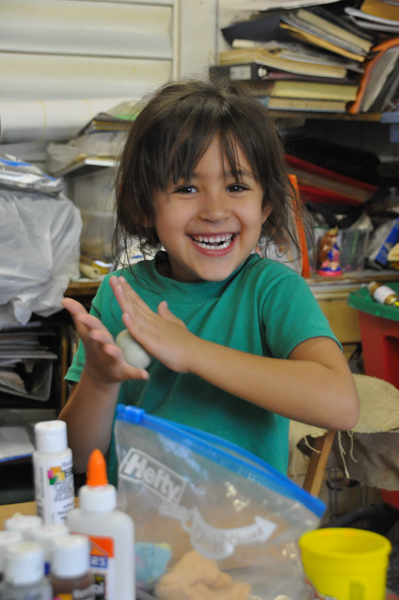 The next generation of mask makers

The vejigante masks made in Loiza are distinct from those made elsewhere in Puerto Rico, because they are made of coconuts, a tradition not observed elsewhere.

Raul Ayala made his first mask when he was fifteen, and learned from his father, Don Castor Ayala, who began selling them to others in the community in 1940.  “With nine kids in the family, he needed to make a lot of masks to feed us,” Raul recalled.  He explained there are more than 15 different styles of masks, with the combination of colors being the main variable.  Primary colors are the shades most used in painting the masks, with the colors of Spain and Loiza being the most popular–red, yellow and a light green.

Raul has names for a couple of particular styles of masks he makes.  One he calls Obiwayza, which is a combination of the word “Obi,” which means coconut in the African language of Yoruba, and “Wayza,” which means “mask” in Taino, which is the name of the island’s indigenous people.  He pointed out a mask with a serious expression, the style of which he called “Enchanted Sadness,” named for a salsa song that ran through his mind as he was carving it.

Raul was one of about 120 folk artists from 45 countries invited to participate in last year’s Santa Fe International Folk Art Market, the largest such venue in the world.  He explained his mask-making process, which he said begins with visiting a coconut wholesaler.  One by one, he examines a mountain of about 3,000 coconuts, ultimately selecting perhaps 40 that are suitable for mask-making. In order for a coconut to be workable, there needs to be three distinct plains and good symmetry for him to work with.   In beginning to carve, he starts by cutting off the back with a machete and then hollows the gourd out, removing the meat and the nut.  He marks in chalk the sections for the eyes, nose and mouth and then saws those areas out.   “You have to be careful,” Raul said. “I probably cut myself 20 times a year.” 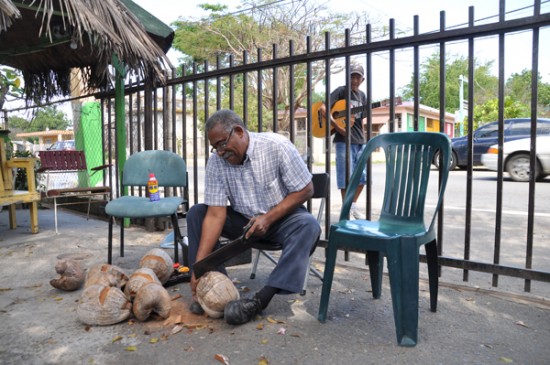 Raul can carve about two dozen masks in two days and then applies a coat of primer, then sands the surface before painting.  Prices for the masks range from $20 for very small ones to $500.

According to Ayala, the Loiza mask-making tradition is related to the Santiago Apóstol Fiesta, which dates to the 17th century.   The annual festivities take place over ten days, with the most important and colorful being July 26th, 27th and 28th, during which a procession marches through town with a statue of St. James.  On the last day of the celebration, the crowd gathers at Raul’s house, where the bomba band he leads performs, with the party lasting into the night.

Bomba is a musical expression created in Puerto Rico at the end of the 17th century by West Africans and their descendants who worked the colonial sugar plantations along the coast. Raul is the director of a bomba musical group founded 52 years ago by his father. Raul said that Loiza has more African roots than any other town in Puerto Rico, with about 99% of the residents being of African heritage. “We are a melting pot of African, Taino and Spanish,” he said. “We don’t see ourselves as African, or black or white. We are Puerto Ricans.”

A sense of pride in their heritage was the common denominator among all the Puerto Ricans who welcomed me into their homes and studios. I am proud to display a piece of Puerto Rican culture in my home and can’t help but crack a smile every time I look at the vejigante mask grinning at me from my wall. 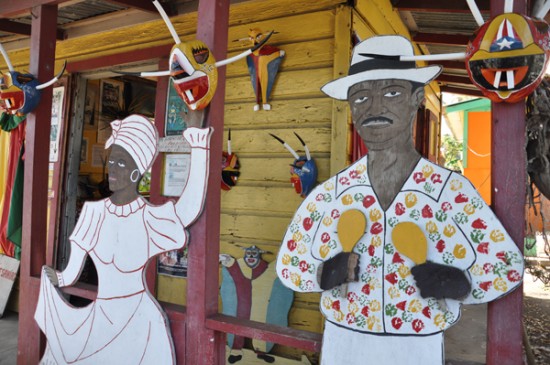 « Previous post
Daycation: A Temple on a Hillside
Next post »
Daycation: From OR to Hilt, CA and Back Again