Last Wednesday, I introduced you to Ellen in Turkey and today Ellen is sharing her latest contribution to our growing collection of recipes… and it’s dessert!

When I was a little girl my grandmother used to bring me a treat she called halvah which was made of ground sesame seeds and sugar.  I pretty much forgot about it until I moved to Turkey and saw it everywhere.  I only knew halvah in small, candy bar sizes (it’s extremely rich); here it’s sold in chunks cut from a giant wheel at the weekly pazars, and in shops especially dedicated to helva, like this one in Antalya: 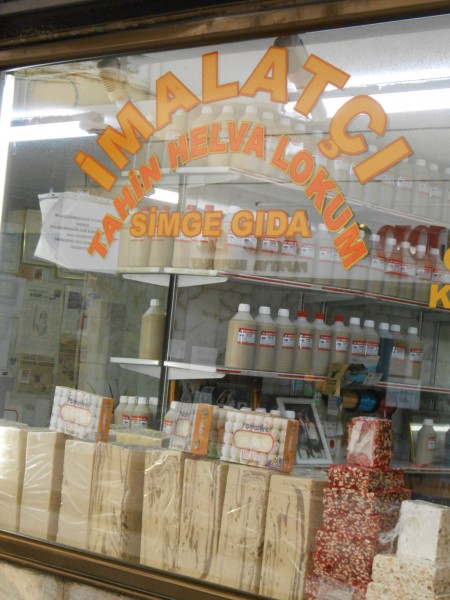 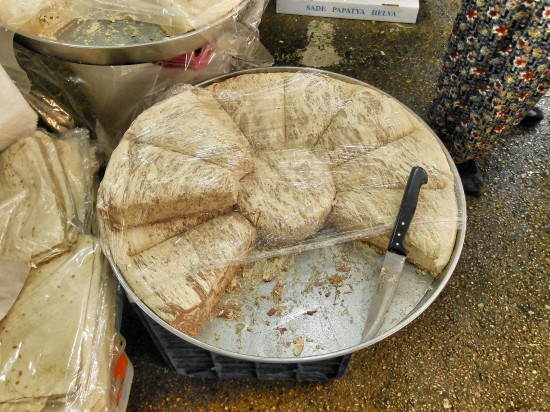 The name halvah comes from the Arabic word for sweet. It has been around for centuries and is popular throughout the Middle East and the Balkans.

My grandmother was born in Brooklyn, but her fondness for halvah came from her Jewish roots. It’s just one more similarity I’ve noticed between Jewish and Turkish culture, along with parallel expressions like ‘güle güle kullanin’ (Turkish for ‘use it smiling’), said to someone who’s just bought or received something, which reminds me of my grandmother saying ‘use it in good health’.

Before coming to Turkey I only knew about the sesame type, but have since discovered that there are several varieties of helva.  For example, In Burdur (a city two hours from Antalya) the specialty is ceviz helvasi, walnut halva. A tour I took to Isparta stopped in Budur on the way home just to pick up some of this stuff that tastes like walnut fudge.

Walnut helva, like Sesame, is nut- based, and generally not made at home. But flour-based helvas are easy to make. I’m including two recipes: One is un (flour) helvasi, which tastes a bit like raw cookie dough; the other is irmik (semolina) helvasi, which tastes like cream of wheat. Both are typically served by families on special occasions, especially upon the death of a relative.  But I’ve had both served at restaurants as the dessert of the day.  The ingredients are simple – the challenge is in having the patience to keep stirring and cooking slowly.

Melt the butter in a saucepan and add the flour. When the flour darkens (after about 20 minutes of stirring) lower the heat and gradually stir in the water and sugar. When most of the liquid has evaporated, turn off the heat, cover and let sit for five minutes. When cooled, shape into balls and garnish with cinnamon or cocoa powder.

Brown the semolina with the butter on low heat. (if you’re using nuts, brown them with the semolina). Keep stirring and watching. You want it to turn light brown but not to burn (about 15-20 minutes). Then gradually add the milk while stirring. ( Add vanilla if desired.) When the water has evaporated, pour the mixture into small bowls and sprinkle cinnamon on top. Let cool, then serve. 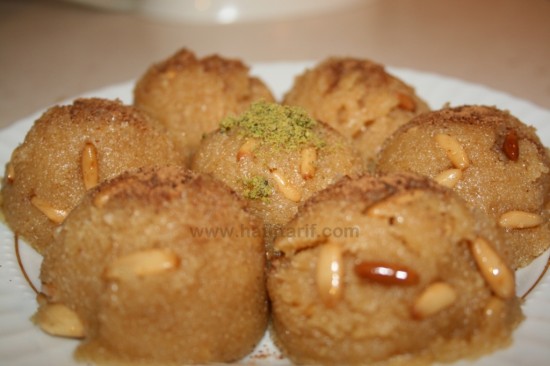