The Majesty of Bryce ~ One of the things we noticed almost immediately was that there were small trees growing on top of some of the hoodoos and we were pretty amazed by that.  How did the trees seemingly grow out of stone?

Turns out, there is a small jay bird that collects and stashes some 40,000 seeds in preparation for the long winter.  The birds, it is said, have such excellent memories they know exactly where they have stashed all of their seeds.  Of course they stash more than they can eat and some of the seeds are dropped where they germinate and grow.  And that is how trees grow on top of hoodoos!  Who knew? 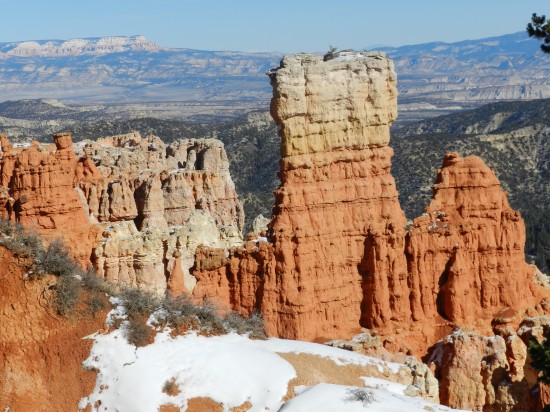 See the little tree on the top of the tallest hoodoo?

Although it was cold, about 46 degrees, the sky was crystal clear and the sun was shining so just a couple of layers of warmth was enough.  There was snow on the ground though as a storm had passed through a few days prior to the day we were there.  The great thing about visiting the parks in the fall (late fall) is the lack of crowds.  You don’t have to wait your turn to park at the viewing points and there is no one in your line of camera vision.  Actually, the front desk supervisor at our hotel in Springdale told us that during the summer months it isn’t even fun to hike in Zion because there are so many people in the park and on the trails.  The trails in Zion are varied in that some of them are easy walks, while others are strenuous and as I like to call them cliffhangers.  In Bryce, the trails that we saw were really steep and there weren’t a lot of railings, etc.,  you really need to know what you’re doing and be well-equipped to take on hiking Bryce and not be nervous of heights.  There’s an old saying, “The first step is a bitch” and I was keenly aware of it while at Bryce.  At Inspiration Point, Abi ventured on without me as I just could not bring myself to climb to the point. 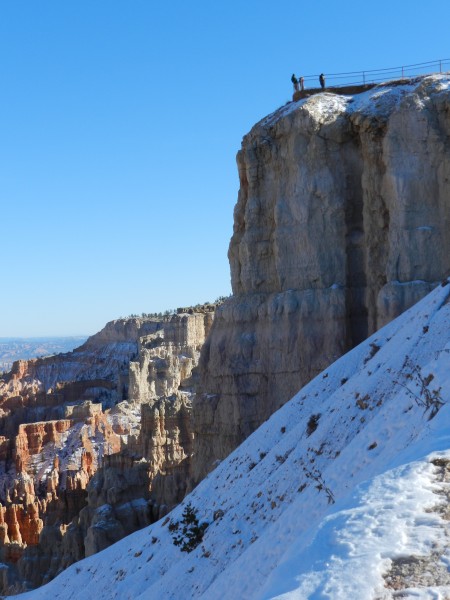 Inspiration Point. I just couldn’t get there, but Abi assured me the views were spectacular! 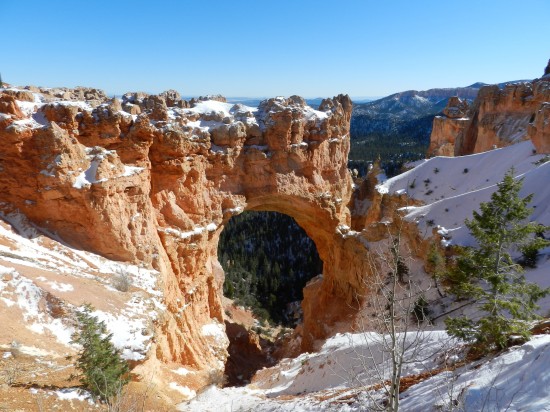 Natural Bridge, which technically isn’t a bridge, it’s an arch. 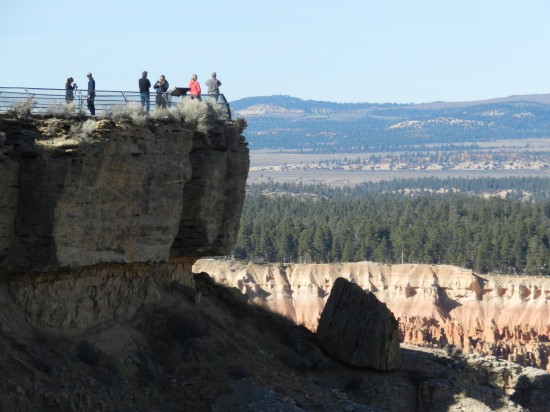 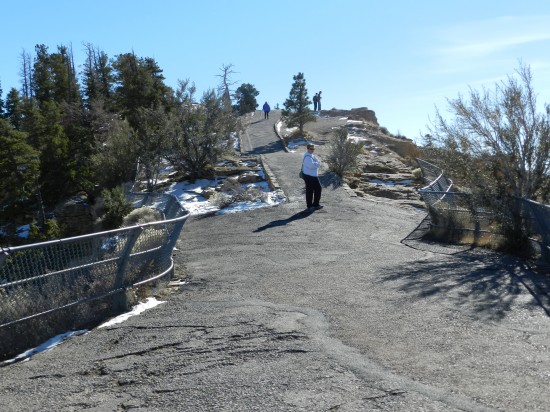 Just for fun… this is me, standing safely on solid ground in the “middle” of the path leading out to the edge of Bryce Point. One does not have to stand on the cliff edge to experience the beauty! 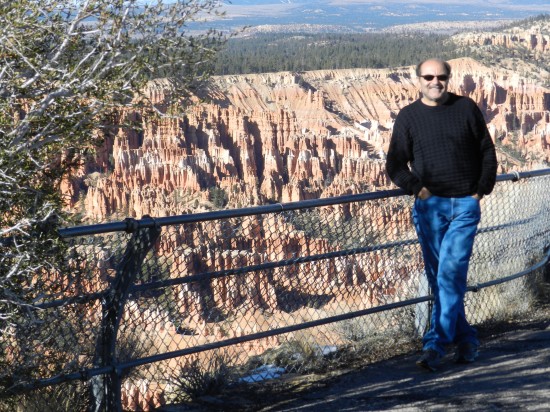 And this is Abi standing at the rail, with the sheer drop off just on the other side. Good thing our camera has a zoom, I didn’t have to get too close to capture the moment! 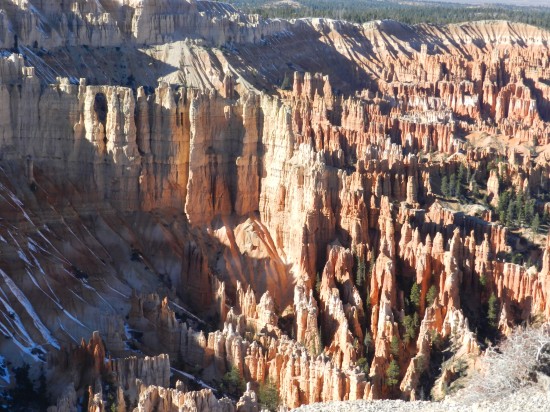 One view from Bryce Point

We got to Sunset Point around 3:30 in the afternoon and we were feeling the drop in temperature by this time.  It is a much larger viewing area where you can walk along the rim (there is a fence at the edge) and it is the trail head for the Navajo Trail down to the valley floor through the hoodoos.  The trail was very steep and looked really intense, not for the faint of heart.  I bet you would be surprised to learn that (many years ago) we rode the mules down the rim trail of the Grand Canyon.  Yep, I did it and it’s one of my most favorite memories.  Did you know the mules walk on the outside edge of the trail?  Actually, I don’t know how I convinced myself to do that… much younger days. 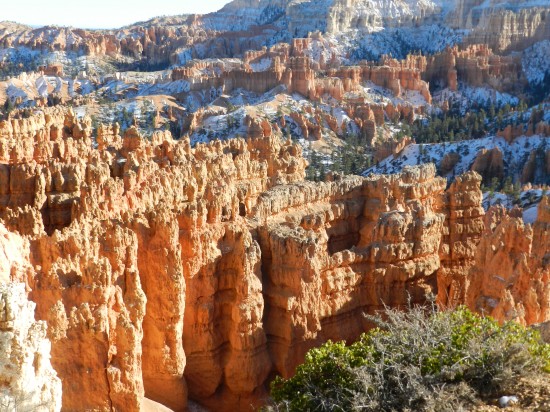 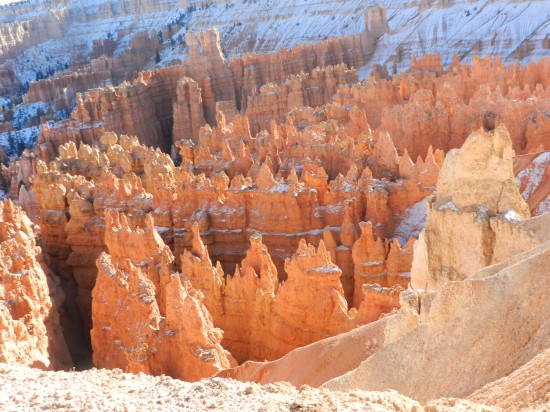 Another view from Sunset Point

As I said, Bryce is like no other place.  There is a surreal sense of majesty, of magic, something bigger than all of us.  One cannot help but feel inspired in some fashion.  It is a place where you could go back to the exact same spot one hour later and see something completely different, depending on how the light hits it.  It’s difficult to even begin to comprehend the process of evolution that brought about such a glorious place on earth.  Should you ever have the opportunity to visit Bryce, do not hesitate to do so. 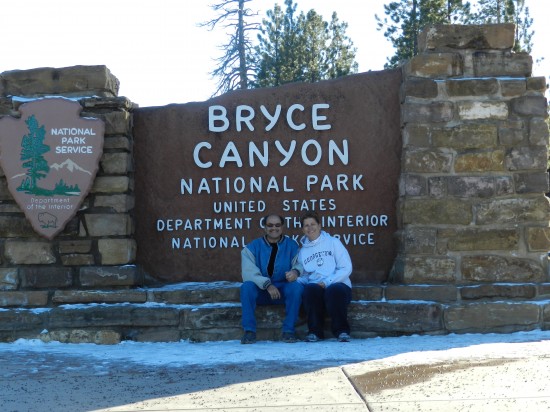 Monument Valley, The Stuff Movies Are Made Of ~