One of the tidbits I read before coming to Zion was that if you don’t do anything else, you must drive the tunnel.  I thought, “Okay, we’ll drive the tunnel” having no idea what that meant.  This tunnel is like nothing you’ve ever seen.

Actually, I think I can safely say that Zion is like nothing you’ve ever seen and pictures do not even begin to capture the magnitude of what your eyes and brain try to take in.  I should add right here that (sadly) I have a fairly profound fear of heights not only if I am up high, but also if I am on the ground and surrounded by tall buildings (or in this case huge walls of rock) I have to hold on to something to study myself as it makes me feel off-balanced.  It really sucks, but there you have it.  I’ve worked for years to talk myself through things but sometimes the physical senses outweigh the mind.  I say all this because by the time we reached the entrance to the tunnel my palms were literally moist and I had a tight grip on the car seat arm rest, which may give you an idea of the surrounding environment.   Fortunately, Abi was driving and he has no such fears. 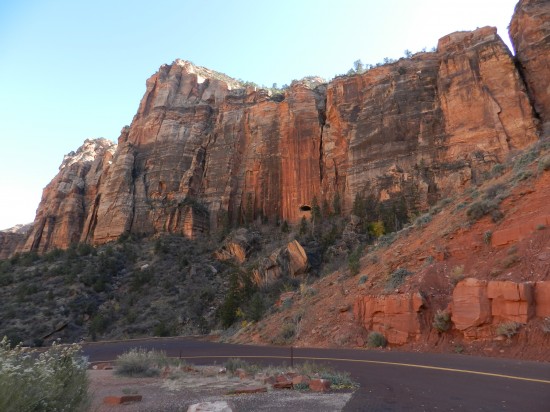 See that hole in the cliff face?

Right at this bend in the road there is a pull out where you can stop and read a sign that describes the building of the tunnel.  The tunnel and Mt. Carmel highway were built in the 1920’s to connect Zion, Bryce and the Grand Canyons.  You can read more here.  Abi and I could not figure out what we were looking at because this hole is very finished with a rock wall.  We were thinking, so this was the entrance to the tunnel and after they stopped using it nature took over again?!  The sign was no help either and we were feeling a little dense.

So, we continued up the two-lane switchback road (with drop off edges and no guard rails) and then there it was, the entrance to the tunnel and it was pitch black inside. Every now and then there was a “window” and a burst of light with brief views of the sheer cliffs you’re driving through.  Cool, huh?  Uh, no, my palms are getting sweaty just thinking about it.  For someone like me, it is like being in an elevator, inside a building, and then having the elevator shoot out in to the open day and you find out you’re actually in an outdoor elevator attached to the side of a building.  (side note:  I will never forgive my Monkey Sister for doing that to me!)

Turns out, the hole in the cliff face was one of those windows. 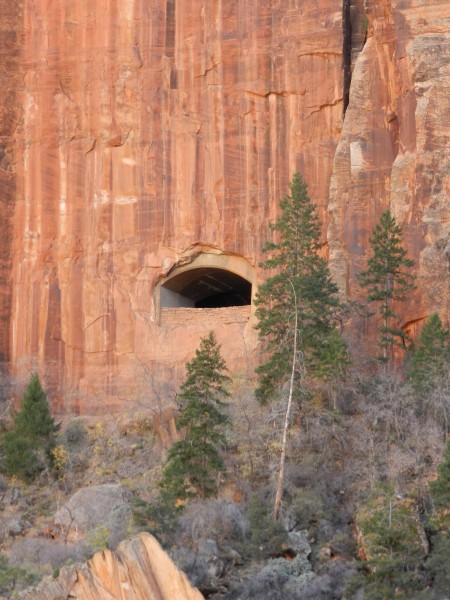 Again, our photos don’t begin to capture the awe-inspiring enormity of these cliffs, they are truly magnificent.  As with many things, I choke down my angst and come out the other side, in this case literally the other side of the mountain and then bask in the splendor.  I think Zion should probably be on everyone’s bucket list.  Tomorrow, we head to Bryce Canyon and guess what?  To get to Bryce I will once again experience the exhilaration of having to drive through the tunnel where most likely I’ll be holding my breath as we climb the switchbacks and pass through the black tunnel.  I’ve been told Bryce is well-worth it.  Here’s hoping! 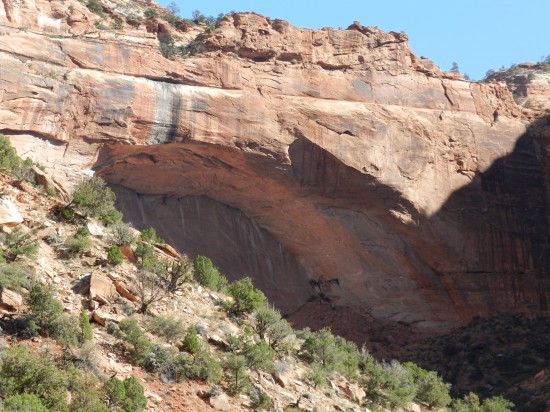 A huge arch near the tunnel 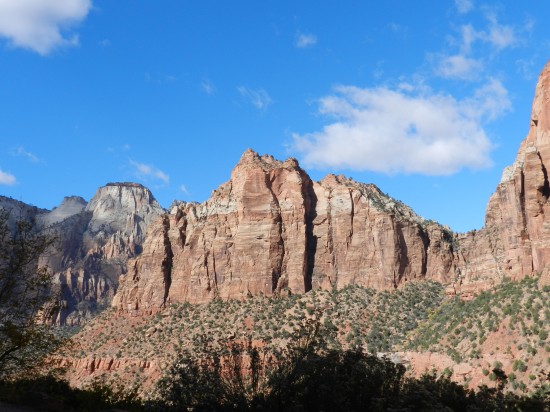 Monument Valley, The Stuff Movies Are Made Of ~
Share: