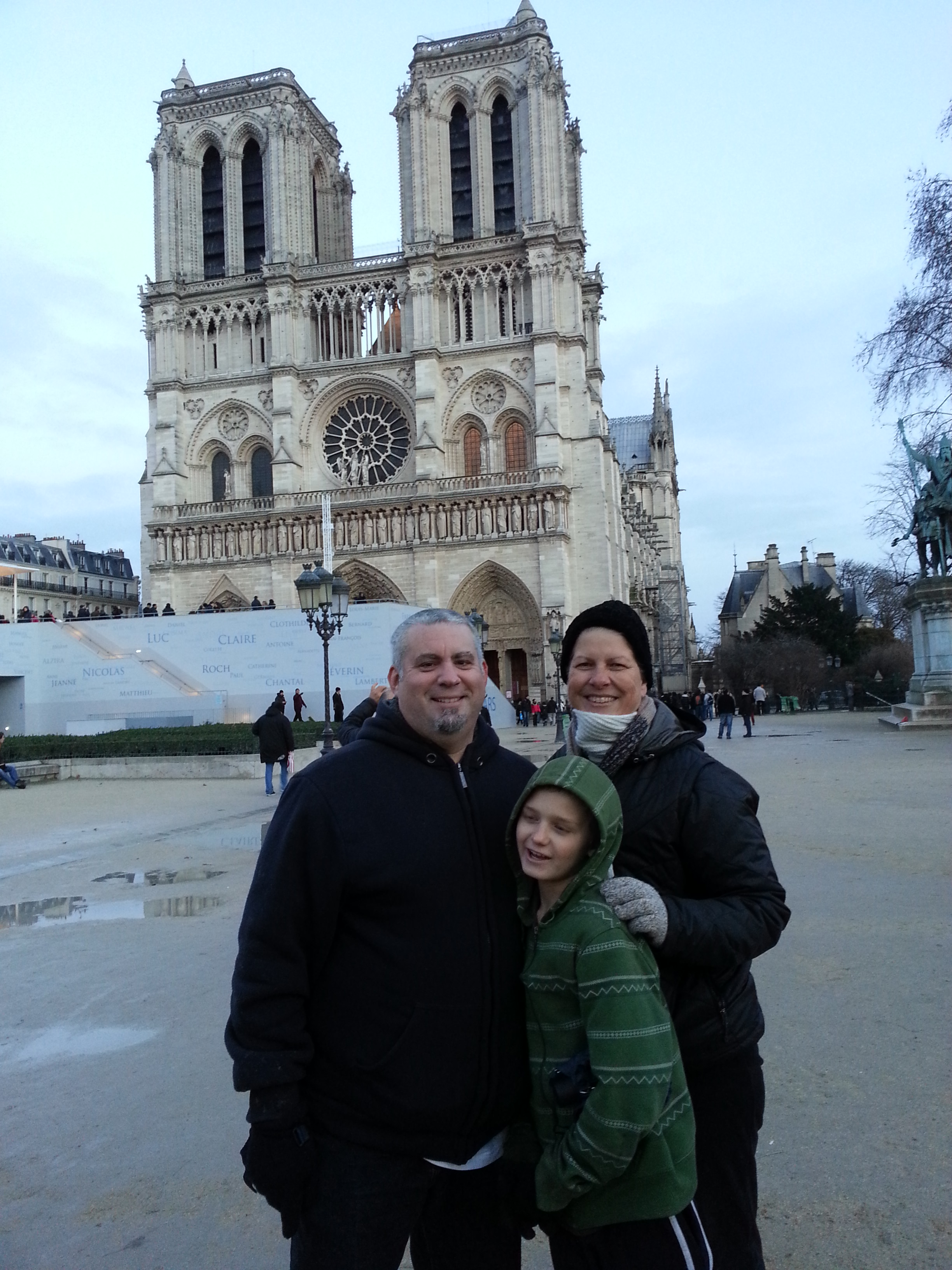 Okay, I know what you’re thinking… Windwalkers, she knows people who walk on the wind?!  No, but I do know an amazing father and son team, Talon and Steven Windwalker.  About 6 or 8 weeks before we left for Paris, I met Talon online, purely by chance.  I think I came across his blog and was curious to learn the story of this father and son who have been traveling the world for two years.

And as a retired school teacher I was really interested in the whole unschooling experience.   Honestly, I can’t even remember how Talon and I first connected, must have been on Facebook, but when we learned that we would be in Paris at the same time, I knew the universe had intervened.

Abi and I met Talon and Steven at Starbucks, in Paris.  Yes, I realize how tacky that was but you know what, Starbucks is easy to find and so it makes for a great meeting point.  We spent a couple of hours sipping our hot drinks “outside,” believe it or not, and soaked up as much information about each other as we could, before Steven decided it was time to go feed the pigeons at Notre Dame.  Abi and I tagged along and got a kick out of how much joy Steven got out of feeding the pigeons, although I objected (with laughter) when Steven tried to get a pigeon to land on my head.  A girl has to draw the line somewhere!  As the sun was setting and the temperature was dropping, we said our good-byes and headed off in different directions knowing the seed of friendship had been planted.  I don’t know when or where, but someday, I hope to meet up with them again and I know we will pick up right where we left off. 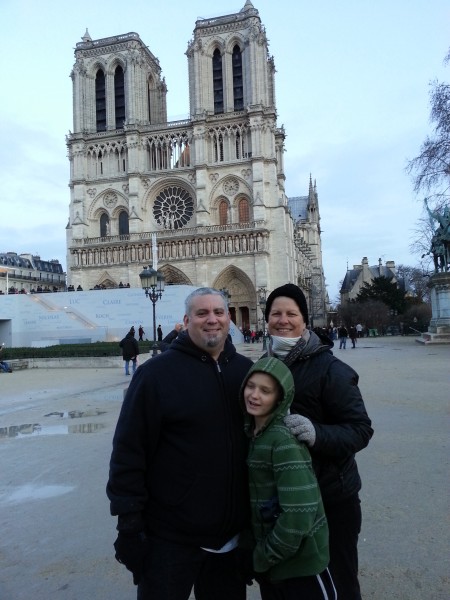 Talon, Steven and me. Abi was behind the camera as we couldn’t manage a selfie with 4 of us and Notre Dame in the photo!

In the meantime, Talon has launched a second blog, titled Travels4Yum!  Food, is universal, food brings people together, food brings life.  And if I know Talon, Travels4Yum is going to be a big hit in the world of travel, culture and of course, food and I’m happy to have had the chance to ask Talon a few questions about his new venture.

Patti:  The obvious question, let’s just get it out of the way… what is your all-time #1, will go out of your way to find it, favorite food?

Talon:  That’s a tough one because I have so many favorite foods. Part of the reason my waistline is the size it is. The answer also varies by what I’ve had lately. For example, in Bangkok I went out of my way twice to get New York-style bagels because I hadn’t had a GOOD bagel in 2 years. After 3 months in Morocco, I would’ve moved heaven and earth for bacon. In Mexico, I specifically went to a city 1-1/2 hours away just so I could get Indian food. However, green curry is one of the things I have a really hard time finding on the road, so I’d probably say on the average it would be that. I recently took a cooking class in Thailand primarily so I could learn how to make the curry paste so I could have my curry when I want it.

Patti:  And of course the second most obvious question… what food(s) will you absolutely not eat?

Patti:  I have a recipes page on my blog because I think food is universal.  I’m guessing you feel the same way, but what is the primary motivation behind the new blog?

Talon:  There are plenty of blogs out there about food and some are even travel related. However, what I haven’t seen a lot of are blogs that tie culture in with the food. Many foods have stories behind them or tell us something about the culture and daily life. For instance, not many people know that pizza is a staple food in Cuba. It’s related to times in the past when food was a very limited resource. Pizza is super cheap to make and it has remained a major food in Cuba. At one point, things were so bad that TV chefs were teaching people how to prepare grapefruit rind that almost tasted like steak.

I’m also a huge street food fan and I don’t see a lot of information out there about street food, and you don’t get a lot of narrative about it. Sometimes eating a dish isn’t just about the flavor or the uniqueness, but about the experience of eating it. Our first night in Vietnam, we had pho. That experience was made memorable by the circumstances. We were eating at a street food place on a plastic table while sitting on very tiny plastic stools. I’m a big boy, so sitting on a stool designed for a preschooler while manipulating my food with chopsticks and a spoon added to the whole experience. I like to weave food and storytelling. 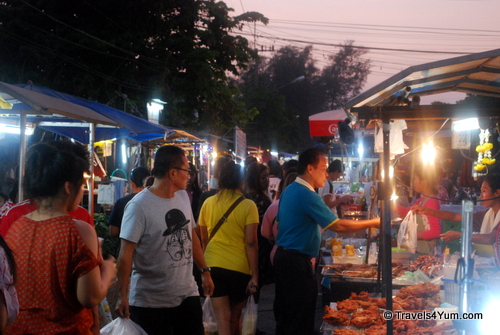 Night market in Ayutthaya, Thailand. Some of the best street food we’ve ever had

Patti:  How did you come up with the name Travels4Yum?

Talon:  I wanted a name that was memorable and not stuffy. I had tried out several different names over a few days and suddenly the named just popped into my head. It was available, and I knew I just had to go with it. When I say the name, it puts a smile on my face.

Patti: Aside from the fact that we need it to survive, what is it about food that brings people together?

Talon:  Food is such an integral part of every culture I’ve experienced. It’s one of the few things that hits many of our senses, and sometimes it’s activating all five! Also, living beings are programmed for survival, so food touches our most base need. Because of that, a lot of our “wiring” is geared around it. Smell is one of the most powerful triggers of memories and food is a huge part of that. Sometimes smelling or even seeing a certain food will bring us back to a time and place in such a powerful way that we can feel like we’re actually reliving the moment. That’s one reason I really encourage people to try local foods when they travel. Nothing can bring you back to a place like revisiting it through food.

Patti:  Do you think food factors in to our beliefs about different cultures?

Talon:  I think so. I know a lot of my own opinions around Chinese culture are tied to their diet. When someone mentions France, usually the first comment someone will make, or their first thought, is related to food. And it’s hard to talk about food without someone commenting on America’s lust for gargantuan portions.

Patti: Why do you feel it is important to step out of one’s comfort zone and try the local food when visiting a different country?

Talon:  Besides giving you a window into their culture, it’s also a wonderful ice breaker. Yesterday we found a little “hole in the wall” restaurant and stopped inside. They have a dish that is unique to this area called bun cha. I had heard the name but knew nothing about it. I ordered it and was a bit perplexed when 3 different bowls of food arrived on my table. I had to ask the server for instructions on how to eat it. She got a big kick out of that, told me what to do, and from that point on we had a more informal relationship and were able to have a deeper conversation about other things.  But really it’s an incredible way to experience local culture. Food can tell you so much! When you’re eating with locals, you get to see parts of daily life that would probably be missed otherwise.  And sometimes you taste something that just blows your mind (in a positive way). 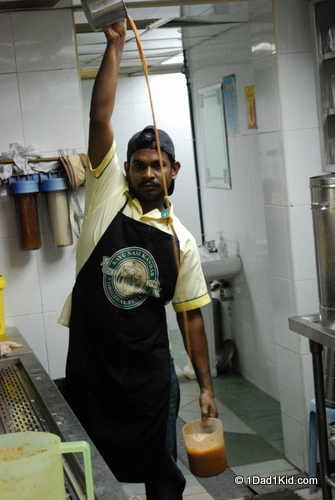 Patti:  Tell us about the cooking classes you’ve taken in the different countries you’ve visited.

Talon:  I’ve just recently started taking cooking classes while traveling. I really wanted to do some in Morocco, but the area we were at was very rural and that region’s food is, well, not very exciting.

Recently, I’ve taken classes in Malaysia, where I learned how to prepare some Nyonya dishes, and in Thailand. I’ll soon be taking a class in south Vietnam. I think I learned the most from the Nyonya class, though, as she was quite superb at explaining things in the market and talking about traditions and culture. There was also a tremendous amount of hands-on preparing and cooking. As she is a perfectionist, I was able to pick up some great tips that I’ve used for other foods I’ve prepared, and I finally learned how to stir fry tofu without it breaking up into major fragments. 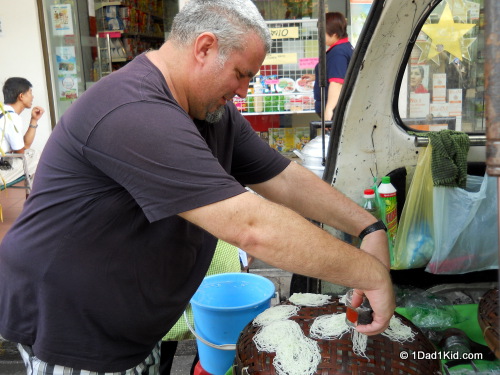 Making rice noodles out of the back of an SUV at the wet market in Penang, Malaysia

Patti:  How about your son, Steven, a.k.a.Tigger?  He is a child of the world, how does he feel about the cultural differences in the foods you find while traveling?

Talon:  He is definitely not a foodie like his dad. He is very finicky and unfortunately, he’s been able to find a lot of Western food when we go out. It’s very difficult to get him to try new foods, although he does like a lot of street food. For him, there isn’t as big of a connection between food and culture. I’m hoping, though, that when he’s older it will connect for him more.

Talon:  We discuss nutrition quite a bit, and he does a pretty good job of knowing when he needs more protein on his plate. He understands that carbohydrates break down into sugar and that fat and protein help you feel sated. We discuss a bit more about agriculture and its connections with the economy, daily life, and the importance of sustainable practices, though. 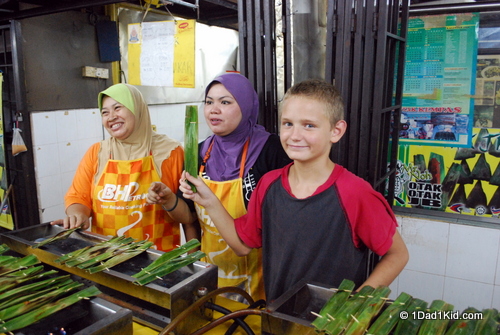 Patti:  When you stay in one place long enough, i.e. an extended housesitting gig, do you find yourself in the kitchen cooking more often than not?

Talon:  Yes! When we are moving around more often, we rarely have a kitchen. Especially in southeast Asia where ovens are fairly rare. I miss cooking and baking, and so does Tigger. Back in the States I made all of our bread and most of our pasta (as in the actual noodles), sauce, etc., from scratch. We have a couple of housesits coming up soon where we’ll have full kitchens and we’re both excited. For me cooking is one of my creative outlets. I love how you can take all these raw elements, put them together, and have this masterpiece at the end. Or at least something that tastes so good you have a hard time not eating more of it.

Patti:  What’s next for the Windwalker team?

Talon:  Lots of travel and exploration. We’re in Vietnam now and over the next few months will be in Indonesia, Australia, and New Zealand. Hopefully, we’ll be back in Europe at the end of the year and beginning to explore more of the Middle East, Central Asia, and Africa.

Patti:  Thank you Talon! Not only for the interview but also for your friendship, wisdom and support.

You can follow Talon and Steven at 1 Dad, 1 Kid, 1 Crazy Adventure or: