How a Manzanita Bush Saved My Life ~

It’s been nearly a month since we found ourselves in Zion Canyon National Park.  Scary how fast time moves us forward, isn’t it?

On our first day in Zion, we hiked to a waterfall near the Court of The Three Patriarchs.

Hiking toward the waterfall near The Court of The Three Patriarchs

I don’t think we followed an actual official trail but rather a foot path that hikers such as ourselves have cleared through the brush.  We met a couple of other hikers along the way, so we didn’t feel too out of bounds.  Along the trail we came across a small grove of Manzanita bushes and whenever I see a Manzanita (which isn’t that often) I always pause for a moment and give thanks to the strength of the Manzanita because when I was 17-years-old, a Manzanita Bush saved my life.  True story. 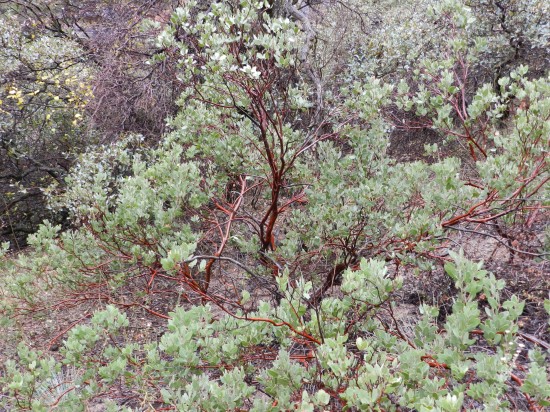 The mighty Manzanita on the trail in Zion National Park

Some events in our life just stay with us, no matter how old we get.  This is one of mine. I grew up in a tiny town called Gardnerville, Nevada.  It’s not such a small town any longer, but at the time of my teenage years it was in fact tiny.  We didn’t even have a traffic signal in town.  Gardnerville, is in Carson Valley, which is just over the mountain from South Lake Tahoe.  Back in the day there was an unimproved road known as Kingsbury Grade that was barely more than a single lane that switched back and forth for about 12 miles and that was the road many of us, who lived in the valley, would drive to reach Lake Tahoe.  My father drove that road everyday as his office was in Lake Tahoe.  To read more about Kingsbury Grade, click here.  We never thought much about the fact that each drive was a bit death-defying.  No guard rails, no lane divides, no safety measures whatsoever.

My mode of transportation and the vehicle in which I learned to drive was a BIG black, 4-wheel drive pick-up with a stick shift that was about 24″ tall and rose up out of the floor board.  What a ride!  I could drive that truck like nobody’s business and I loved it.  On that fateful day when the Manzanita Bush was about to save my life, my friend and I decided to drive to Lake Tahoe just for fun.  Remember, I was only 17 but I had driven Kingsbury Grade so many times it was second nature to me.  Anyway, we were about half-way up the pass when my trusty pick-up sent out a metal scraping screech and died on me.  I had no ability to drive and I had no idea why.  There we were two teenage girls in the most precarious situation of our young lives, sitting in a pick-up, headed uphill, with both of my feet firmly planted on the brake pedal.  We had just come around a wider than average switchback so the only thing we could figure out to do was to roll back down about 20 feet and try to maneuver the pick-up so we could park on the shoulder of the road.  And when I say shoulder of the road I really mean a dirt patch at the edge of the cliff.

So with my friend looking out of the window and guiding me, I s-l-o-w-l-y began to release my foot from the break pedal and we began to roll back.  I had no gears to work with but we were getting the job done.  We made it to the switchback and as I was trying to back onto the shoulder, my friend panicked and yelled at me that we were too close to the edge.  When she yelled she startled me and I swerved the steering wheel too hard and it caused the truck to roll back across the road and up the side of the hill about six feet, which is when the rear tire got caught in a big thick Manzanita bush, stopping the truck.  You know the whole “life flashing before your eyes moment?”  Well, at 17, it’s a pretty short moment but terrifying just the same.  And so there we sat, shaking in our skin, with no clue as to what to do next.

Finally, a car came along driven by a couple who stopped to help us.  Remember too, this was long before cell phones were even an idea and one was forced to rely on the kindness of strangers.  We climbed out of the truck and the couple drove us back down the mountain and left us at the sheriff’s office in town.  I don’t remember anything about them or any conversation, but I do know they helped save us.  Fortunately, for us, the sheriff on duty that night was a young man that everyone in town knew and he knew us and knew that we were scared out of our minds.  He drove us back up the mountain and told us silly jokes while the three of us waited for the tow truck.  Once the tow truck arrived, it was then we were told that had the tangle of Manzanita branches not stopped the tire, the truck would have continued up the hill and possibly rolled over.

The hardest part of the night, for this 17-year-old, was telling my father what had happened.  I can’t remember where my parents were at the time, but they weren’t home so it was a day or two later that all was revealed.  It actually turned out not so bad because like all good moms, mine was so incredibly thankful we were alive, no way my dad could say anything about the fact that we had gone off on a little road adventure and ended up in a sheriff’s car.  In my head, I’ve always remembered it as the truck’s drive shaft broke, but I know nothing about cars so I may have it wrong. Sadly, it was determined that my trusty pick-up wasn’t worth repairing and it was sent to wherever old pick-ups go to die.  I really loved that truck!  And that my friends is how a Manzanita bush saved my life!  True story.

See the USA in Your Chevrolet

The Lens of All Our Experiences