Does anyone not love flan?  It’s smooth, creamy and delicious, right? I received the following two recipes from two lovely women from different parts of the world.  After receiving the recipes, I started wondering about the origins of the yummy dessert.

The first thing I learned is that Creme Brulee is actually flan, but it has a hard crispy caramel topping while flan has the soft caramel.  Or at least that’s what Wikipedia had to offer.  Both desserts are actually French, but flan has become more well-known to other regions of the world such as Latin America and Cuba.  Basically, what we all love is a plain custard with caramel on top. So simple, yet so wonderful.  Now that you’ve had a little lesson in the origins of flan, here are two recipes for you to try.

Ana, who owns and operates a Bed & Breakfast in La Habana, Cuba has shared a recipe that has been passed down through family generations.  Nancy, who owns and operates an intimate Bed & Breakfast near Tubac, Arizona has adapted her recipe to the flavors of the southwest as they live close to the Mexican border.  Try them both!  And while I’m sure they are both wonderfully yummy, let Ana and Nancy know how much you enjoyed their flan, won’t you?

This recipe is very tradicional here in Cuba but everyone make it different, this has been in my family since my grandparents and now my granddaughter had learn as well.

To make the pudding (Flan):

Mixt well all your ingredientes, strain them

To make the Caramel coating:

Place the sugar for caramel in a cooking recipient and place it over fire for the sugar to melt -make sure you do not burn the sugar. Keep the flame really low. When the sugar becomes brown close the flame and place your caramel in the Flan mold, tilt the mold, so that the caramel gets evenly coated on the base and sides. The mold or recipiento shall be firmly closed to be cooked in a water bath (A bain-marie) for 40 minutes.  Let cool and serve cold. 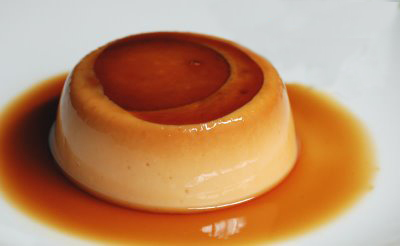 One package of D’Gari caramel custard

Hint:    The custard is best if it is made at least one day ahead.