Dumpster Diving on the Grand Canyon ~ 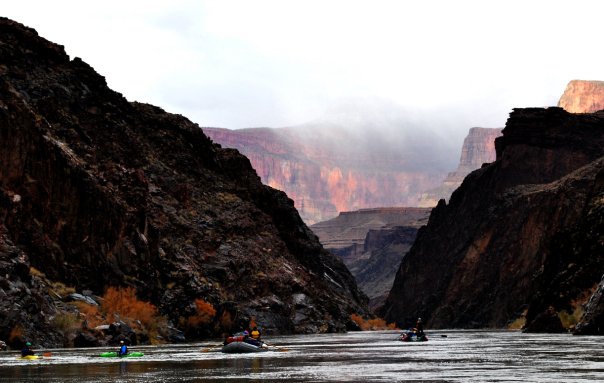 The following is a story I wrote about an interesting experience I had in Flagstaff, Arizona on New Year’s Eve after a 19-day Grand Canyon rafting trip with a group of friends. Most people don’t boat the Colorado in the winter for a number of reasons,

number one being that it can be cold – really cold – on Christmas Day of this trip we enjoyed a “high temperature” of 24 degrees.

When I tell people about the two Grand Canyon trips I’ve done (both of them in December), the most common response I get is “why?” Why would one subject themselves to so many days of cold weather, on a cold river, at a time of year when there is as little light as possible? It’s a fair question, and I’m still not quite sure what the answer. George Mallory, a famous mountaineer, was once asked “Why do you want to climb Mount Everest?” To which he responded, “Because it’s there.”

Perhaps boaters feel the same way Mallory felt about climbing as they do about boating in the winter, although I think that’s just part of the answer. There is something magical about floating in the winter – the still, quiet, and cold air; the camaraderie that builds amongst a group who all experience the same tough conditions; or maybe it’s knowing the love of an adventure is something no one else will understand unless they do it themselves. Either way, I am at ease knowing simply that I do love it, and for which reasons I, myself, am still unsure of.

By Will Volpert of Indigo Creek Outfitters – Ashland, Oregon

We’re in a van headed to Flagstaff. We hired Ceiba, a company out of Flagstaff, to pick us up at Diamond Creek and they’ve got a driver so of course we’re having a good time telling stories, hooting and hollering. Maybe sneaking beers here and there. Maybe. Over the past 19 days there has not been one moment that couldn’t make a great story. We’ve made great friends with each other. Most of us were acquaintances before the trip but now it’s just full on bromances and, hell, even a few romances. 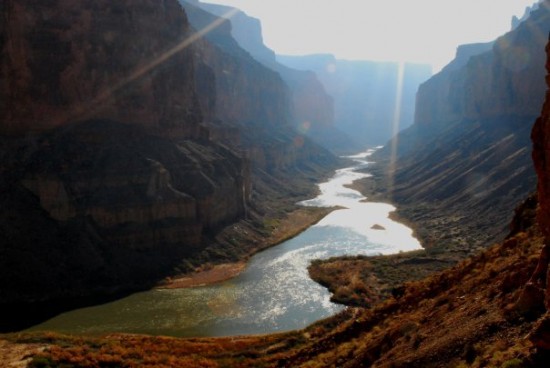 Both my brothers are in the van. Matt is a student at The University of California at Santa Barbara (UCSB), Skip is at the University of Oregon – we don’t get on the water together as often as we used to. My girlfriend, Dana, is sitting next to me. We’ve done quite a few multi-day trips together but nothing really prepares someone for a 19-day river trip so I’m ecstatic that she had loved it as much as I had. Everything other than getting to the river has gone perfectly. Dan Thurber, one of my favorite people to float any river with, had a major vehicle break-down in California. It seems that some gophers took a liking to the wiring under the hood. He had to borrow a van from a friend to get out, and arrived at Lee’s Ferry around 10 AM the day we were to launch. But that’s a whole other story. Other than that this has been a dream trip. Great people, great river – and really those are the only two things that matter.

In October I got a hold of the boys at Clavey Paddlesports and told them what I was looking for: two Kokatat dry suits (total cost: $1,800). I bought Dana the Women’s Dry Suit with the drop seat and myself the typical blue/mango Men’s Dry Suit. Our trip launched on December 13th –which is a perfect time of year to ensure that your beer is always ice cold, but also the time most people don’t go boating because, well, everything is ice cold.  With our new dry suits packed and our raft in tow, we headed for Lee’s Ferry, Arizona – the put in for the Colorado River. 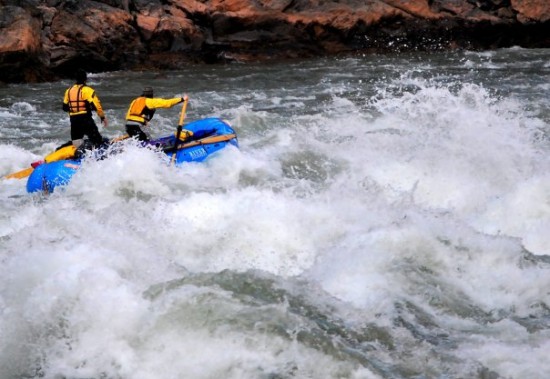 We had the river to ourselves and didn’t run into another party until the afternoon of our ninth day. 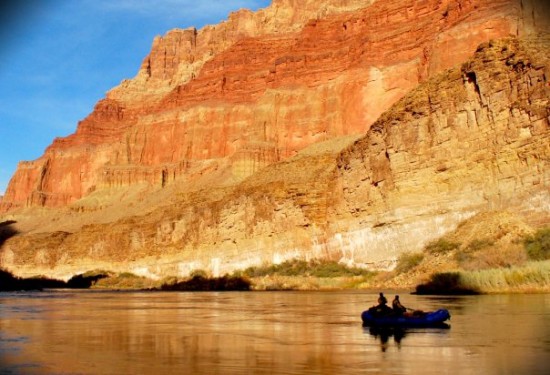 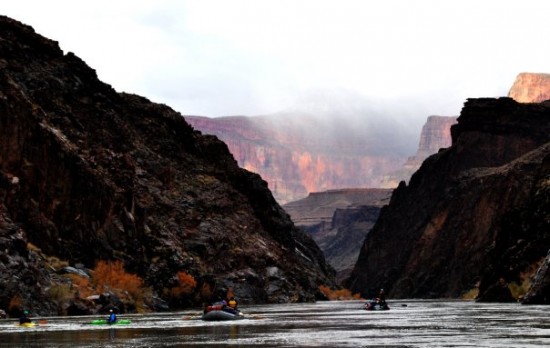 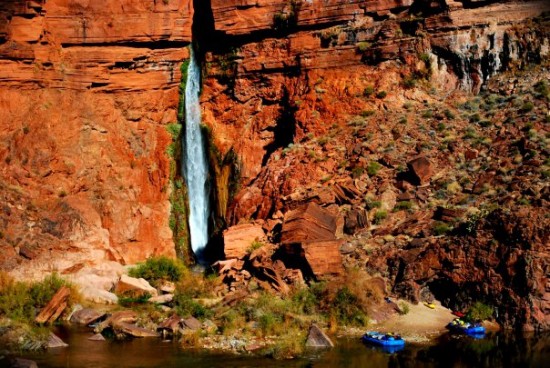 We had a great Christmas layover across from Deer Creek. The hiking was phenomenal, whitewater was plentiful… it was just one of those trips. Dana and I wore our new dry suits the entire time we were on the water. 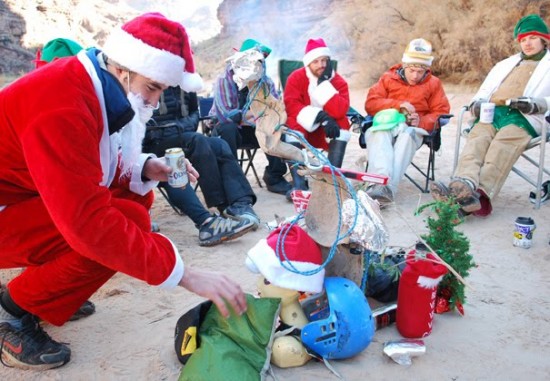 Our last night camp was about a mile from Diamond Creek. In the morning we woke up and started putting things away. Neither of us felt like wearing our dry suits with only one mile to go, so we threw them in a black trash bag and into the boat.  Fast-forward five hours and the van is pulling into Ceiba’s driveway. Our vehicles are here so we jump out and move them near the big trailer of mixed gear. All the equipment needs to be separated and put into the correct rig. While Dana and I are throwing things into our little trailer other folks are doing the same with their respective rigs. A few others are throwing bags of trash into the dumpster. As all this is happening, the trash truck shows up (great timing, right?), picks up the now-full dumpster, lifts it up and over, sets the empty dumpster down, and then leaves for its next destination. Everything is going great.

Let me pause and explain a concept known as the “DTI”. Dana and I have a great relationship. Regardless of the type of relationship you have, boaters in particular need to be wary of the DTI. This stands for Domestic Tranquility Index. This is an incredibly volatile index that shows exactly how tranquil ones relationship is – and it can change in seconds.

Also, the DTI is tested when bad stuff happens. For instance, when, at this moment in the story, Dana says -“Have you seen the drysuits?” – this is an instant when DTI is definitely about to plummet because I know that the dry suits ($1800) are in a black trash bag inside the garbage truck headed to who-knows-where.

We look everywhere. Maybe they weren’t thrown out, right? Alas, no one can find them. Dana goes into Ceiba’s office to talk to someone who might know where the trash truck is going. Nobody at the trash company picks up the phone, so she leaves a message. I’m pissed, Dana’s pissed, so naturally we blame each other for putting the most expensive articles of clothing we’ve ever owned inside trash bags. The DTI is plummeting and there is no bottom in sight.

Everything (well, you know, minus the dry suits) is packed. It’s New Year’s Eve, we’re in Flagstaff, and our group wants to party. Dana and I are going to look for the dry suits and meet everyone at the hotel. We take off, headed down the road looking for a garbage truck. The DTI has now officially hit an all-time low. While we’re busy yelling at each other, Skip calls me and says they were able to get the driver’s name and phone number. We call him. He says we aren’t really supposed to go through the trash, but he’ll wait to dump it until we get to the dump. We look the address up on Dana’s phone and hit the accelerator.

We get to the dump. The lady at the gate quizzes us about what we’re doing. We try to explain but her response is “You aren’t allowed to salvage.” I tell her we just really need to see our friend, Patrick, the dump truck driver. She lets us in. We fly by the 5 M.P.H. sign and head into the abyss. I call Patrick and we find him next to a large pile of trash. He says that we’re “lucky because it was a small load today.” The amount of trash is astounding. This would not be a “small load” in my book. Patrick, my new favorite person on Earth, gives us a hint. He points at a yellow bucket. “You see that yellow bucket? That was one load before your guys.” “So, he says waving his hands in front of a massive pile of garbage, your stuff is somewhere around here.”

We have not showered in 19 days. We dive into the trash pile. As far as we had come, as lucky as we had gotten, and as helpful as everyone had been, I was certain we would not find the suits. There was just so much trash. Too much. And, of course, it’s not like a black trash bag stands out in a universe of trash bags. But all of a sudden, I found a trash bag that was full of empty beer cans. These were cans that had traveled down the river with us, beer that had united our group, had helped build new friendships, and beer cans that were now leading me to my sacred dry suit. I reached down, brushing aside some old mac and cheese, and picked up a black trash bag.

In Flagstaff there are train tracks that go right through the middle of town. It’s New Year’s Eve and I’m at a restaurant with a group of friends I would never trade out for anything. Every time a train rolls through town you can get discounted “train shots.” A train rumbles through town, we get train shots, and I hoist my shot high in the air. “To the river gods!” We cheer and take our drinks. Dana’s beside me. We’ve had a long day of ups and downs with the DTI but we’re right back where we started: the index is running high, we’re as happy as can be, and we have two awesome dry suits. Plus, hell, we’ve got a great story! 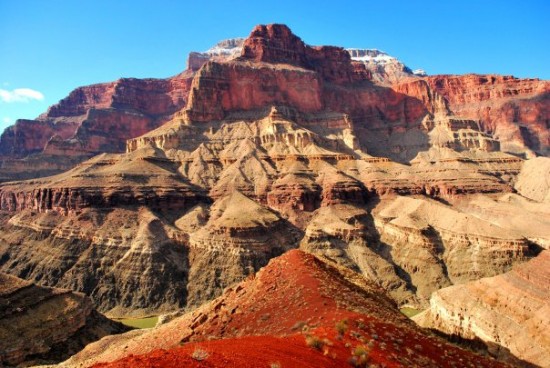