The Charm of Sharm El Sheikh

Situated upon the welcoming shores of the Red Sea and at the southern tip of the Sinai Peninsula, Sharm el Sheikh is one of the most attractive tourist destinations in Egypt. From its scintillating nightlife to its truly pristine beaches, countless visitors flock to this seaside gem each and every year.

So, what are some of the main attractions here and why do so many people book holidays to Sharm El Skeikh? Let’s quickly address these questions.

Without a doubt, one of the most distinct amenities of Sharm el Sheikh are the unforgettable beaches located nearby. As the climate here is hospitable throughout the year, visitors can expect to partake in some of the most picturesque coastlines known to man. A handful of truly beautiful locations include Naama Bay, Shark Bay (there are few sharks found here) and a charming lagoon located just to the north of town. Alongside some undeniably stunning views, these cerulean blue waters have become a popular site for scuba diving and snorkeling enthusiasts. For those who would prefer a view from slightly afar, glass-bottom boat rides also abound. 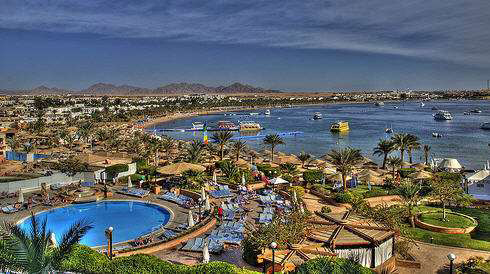 Notwithstanding the public beaches, the charm of Sharm el Sheikh is also derived from its ecological wealth. In fact, the Nabq Natural Resource Protected Area boasts no less than six hundred square kilometers of coral reefs, mangroves, untouched dunes and numerous species of intriguing wildlife. This habitat is a perfect example of nature at its finest.

Of course, Sharm el Sheikh is also known for its bustling city life. As tourism is the main industry here, visitors can enjoy a modern experience centered within an ancient culture. Of particular interest are the colorful market stands that are managed by local Bedouins; much in the same way that they have been for hundreds of years. Handcrafted textiles and countless keepsakes can be found alongside an alluring selection of clubs and bars.

Sharm el Sheikh has also attracted a considerable amount of commercial attention due to its burgeoning economy. Thus, luxury hotels such as the Hyatt Regency, the Four Seasons and the Ritz-Carlton can all be found here. Without a doubt, living in luxury has never been more appealing.

These are only a handful of the attractions that have enabled Sharm el Sheikh to rise to the forefront of the tourism industry in Egypt. With so many natural and urban delights, it is no wonder that this location will provide memories which can last a lifetime!

San Francisco, The City by the Bay ~

Have a Ball With Carnival Cruises