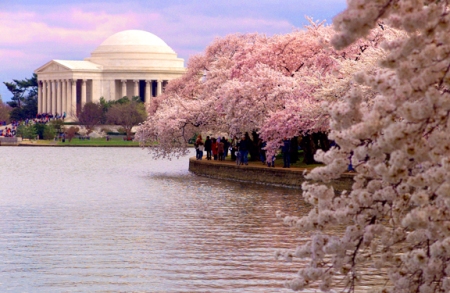 In all of my years of spending time in Washington, D.C. I have yet to time it right in order to see the Cherry Blossoms.  Our son spent 4 years at Georgetown University, which means we were in D.C. at least 8 times in those 4 years.  Never saw the blossoms.

After spending 4 years back on the west coast for graduate school, he is once again living in D.C. and we have visited several times over the past couple of years but have we managed to see the blossoms?  No.  Missed it by about 10 days one year – but that’s as close as we’ve gotten.

I was born in California, grew up in Nevada and returned to California within a year of graduating from high school.  Stayed put for the next 30+ years living life and with not a single thought of living on the east coast, but now – now it’s on my radar.  I mean how else am I going to see those damn cherry blossoms?!  Seriously.

Sneezing my way through the trees, would still be so worth it.  So what’s the solution?  It’s not like we can hop on a plane each spring in an attempt to time it right, there are millions of little wet drops – rain – that can wash away the blossoms while I’m sitting in a plane flying across the country.  Okay, that’s an exaggeration, but you get my point.

So, moving to the east coast is #6 on my “Before I Die” list.  That sounds a bit extreme, I know, but there’s much more to it.  I’ve lived on the west coast my entire life and I think it’s about time to try a new time zone.  More than anything this mama wants to live on the same coast as her son (and soon-to-be daughter-in-law); that’s the #1 priority.   I can list lots of other reasons as well, but I won’t bore you with the details.  Suffice it say, I’ll be ready to go when the universe presents the opportunity.

If you’ll remember, I am a lover of history and so much of our country’s history is east of me and I would love to explore the eastern seaboard by way of an extended road trip, taking the back roads through upstate New York, Vermont, New Hampshire and all the way to the tip of Maine.  I’ve heard so much about the fall colors on the eastern seaboard, I’m thinking a late summer early fall road trip would be ideal – as long as we turn around and head south before winter hits the far north! 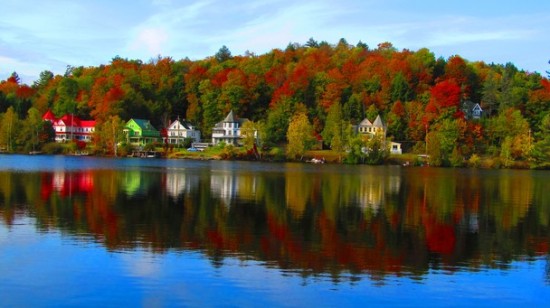 Instead of stopping to smell the roses, I’d like to stop and take in the views of a real life fall scene such as the one in this photo I found from National Georgraphic.  I mean, is that picture stunning, or what?  It looks like a page straight out of a Normam Rockwell coffee table book, doesn’t it?!  Once we get to Maine, I’d like to sit out on a deck – with a bowl of steamy clam chowder – and look out onto the harbor of a small town in Maine and take in the ocean air.  Okay, the part about the clam chowder is a complete lie because I’m allergic to shellfish, but I like the image in my mind and Abi would eat the chowder.

Anyway, I’m sure you get the idea of where I’m going with this.  The U.S. is a huge country and while we’ve explored more than half of the states, we still have so many more to work our way through.  And when you live in the pacific northwest, it’s a bit far to explore the eastern states so living on the east coast would be just so …  well, convenient!

What about you?  Where would you live if the universe presented you with the opportunity to try a new time zone?

Have you entered our giveaway?