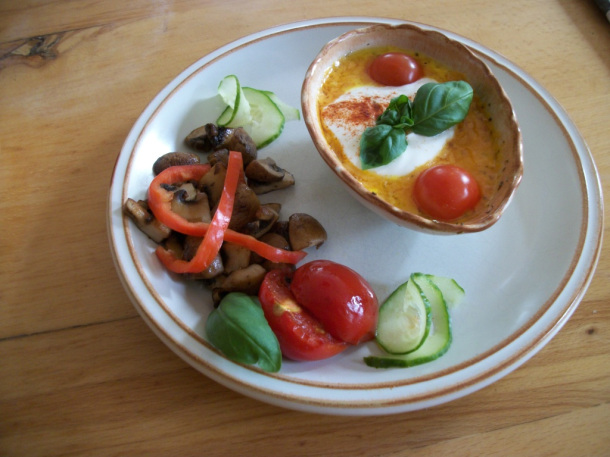 Ireland, is very much on our “must see” list.  I don’t know when we’ll get there, but we will.  One of the things I love about owning a Bed & Breakfast Inn is the connection between Innkeepers world wide.  It is a vast community and I’ve never come across an Innkeeper who wasn’t willing to lend a hand, answer a question or in this case offer a specialty of the house recipe.

Peter and his wife own The Glenribbeen Eco Lodge “…located between Lismore and Cappoquinn on the N72, in the heart of South East Ireland’s most picturesque region.”  It’s nice to know that when we actually do make it to Ireland, we will have an inviting inn at which to stay with gracious hosts.  Please take a few moments to read through what looks to be a traditional Irish breakfast.

Since we started making them back in early 2000’s we’ve had a lot of good comments and requests for the recipe. I always have to point out that we use a combi-oven which uses microwave at 33% while cooking at 250C. A combi-oven is one that can bake- grill – microwave or any combination of these at once. However I’m told that a good hot oven will do the trick abeit slower. I’d consider giving the dish 2 x 20 seconds in the micro as well.

When serving we add a side-dish of local mushrooms and garnish the plate with edible flowers (spicy nasturtiums) and flowering herbs from the garden. We serve home-made 4-corn+ treacle brown-bread. It’s heavier than most but adds gravitas to the light spicy egg-dish.

In the recent years the Glenribbeen Special has had exposure on national Irish television and many newspaper articles and has started been featured in the local Dungarvan/West Waterford Slow-food festival to highlight local cuisine. I’ve been told that it’s now on the breakfast menu of several local B&B’s. 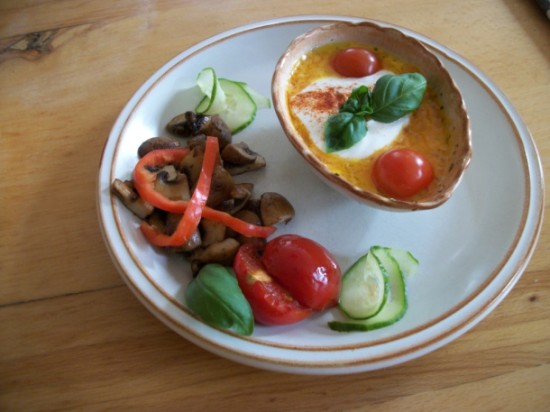 Necessary;  A combi-oven that can grill/cook while microwaving & a ramekin,

Beat well with fork. Place in combi-oven 2 mins at full heat and 33% micro-power.

Remove – mixture should be ‘set’. Sprinkle liberal amount of grated cheese (I favour mix of Mozzarella & Cheddar). Top with yoghurt and sprinkle chilli and add halved tomato and put back in combi-oven as before for 1minute.

* It goes without saying that the eggs are from our own hens and the cheese is (usually) local.

–        served as usual with a portion of fried mushrooms on a dressed plate.

Start to finish 4 minutes. I love this with potato-bread or good wheaten bread.